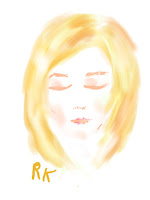 My mom got called to the principal's office only once. It happened when I was 12. I recall that it was in April. I also remember that on the way back from school, holding her hand, I was grateful for the pouring rain because it hid tears that were running down my cheeks.

I wasn't brilliant but I was a good student. In fact, I was good enough to have many of my classmates wanting to copy my homework and test answers, nearly daily. It actually went on for years. In America, that's called cheating and is frowned upon and highly discouraged (to say the least.) In the former Soviet Union cheating was not just expected, it was a kind of right of passage for every kid who "knew how to live well." I remember I was so angry. It was so unfair. I worked hard (as I said, I am no genius. Everything took work for me - from math to Russian grammar.) And then to see all my work to be copied in a matter of minutes by my classmates made my stomach turn.

I bet you wonder why I kept giving them the answers then. Well, when I was 12 years old I couldn't explain why I was passively giving in. I didn't know how to put it into words. But now I do and the answer is simple and scary at the same time. I was giving in because I was afraid of what would happen if I didn’t, because I was bullied. I was bullied. All. Of. My. School. Life. Every single day. Not that there needs to be any special reason, but you might also wonder - why would anyone bully me? This answer is also pretty simple and scary at the same time. I was different. I was one of two Jewish kids in my school. And I was known as Жидовка - a Russian derogatory word for a woman or a girl of Jewish descent - whose only claim to this world, in the eyes of my classmates, was to provide homework and test answers to the Ukrainian and Russian children in the class. Bullying and torment took many forms and I won't write about that now because I don't want to dilute my key point and, also, because it hurts, a lot.

And yes, before you ask, the teachers knew it. And, no, they didn't do anything. And, no, I could not complain to anyone except my parents and grandparents at home. But I rarely did that. It was just a part of life. It was part of my life as a girl growing up in a place where I was the unwanted member of society. And, upon reflection now, I think I may have believed that I could "win them over" one day. That one day they, my cheating bullies, will wake up and realize how wrong they had been. How terribly unfair they treated me. How interesting really was as a person. After all, I read cool books, I wrote poems, I drew in pencil and was pretty good at it, I could tell funny stories. And perhaps, I thought that, eventually, they will notice! And maybe they will even like me - just the way I am... what a silly little fool I had been.

But then one day it happened. All the rage that was building up for years, exploded. The kid's name was Vasya (Vasily) and we had been in the same class since we were both six years old (Soviet schools were the equivalent of K-12). He had a round face, small squinty eyes and the laugh of the Satan, or at least that’s how it sounded in my terrified 12-year-old mind. It would have been just another day. As usual, Vasya snapped his fat little fingers to signal that he was ready to copy my homework answers. But it wasn't an ordinary day. It was the day that something snapped in me and instead of giving him my papers with my neat handwriting, I said "no!" Except, I didn't just say it, I screamed "NO" with the primal fierceness of a caged animal. Vasya came closer to my desk and laughed his evil laugh, which attracted others to join in on the action. And then he looked me in the eye and said "Жидовка, дай по хорошему" (“you, Kike, better give it the easy way or else.")

I repeated "No" but now in a quieter voice.

And then I grabbed my enormous school bag (important note about my bag: I was so worried that I would need some book unexpectedly that I carried all my books, for all my classes, making my bag weighing about a ton.) All the rage and indignation I felt, made my otherwise untrained muscles tingle with strength.

I lifted my bag into the air, and smashed it into Vasya's still laughing face.

After that, everything moved really fast. Someone screamed. Someone else called the teacher. There was a commotion all around me. My mom's work was called and she was ordered to "report immediately to the principal's office."

I broke Vasya's nose, either with my enormous bag or with the sheer force of my pent-up rage. Just in case you are wondering, physically he was fine. He had been in enough fights in his life before his face met my heavy bag.

What happened next? Since I was otherwise a well-behaved (at least up until that moment) and good student, and because it was the Soviet Union, I got reprimanded by the principal and sent home.

My mom and I walked home in silence. The rain was beating down on us. I was crying. But these tears were not due to the despair I felt for getting in trouble... no, these tears were much worse - they were the symptom of the bottomless hopelessness and realization that there is no escape from this treatment. I cried because I knew that that I will always be Жидовка (kike, a dirty Jew). I cried because, as unfairly as I had been treated, as unfairly and harshly as Jews in the Soviet Union had been treated, it seemed impossible to change it. And I couldn't and wouldn't be able to fight every Vasya I would encounter with my bag.

It's been decades since that day. I rarely, if ever, talk about being bullied. So, why do these memories of daily torment and Antisemitism come to my mind now and I am compelled to share them on the World Wide Web? Because hate, including Antisemitism, is all around us…around me, more so than I ever felt it in years, in decades.

Please don't misunderstand: this isn't only about me being bullied as a child in the former Soviet Union, while that, within itself is a sad and painful story. I beg you - do not overlook the bigger picture and message. It's a story about what happens when hate and active discrimination is just what's expected, when it becomes part of every day, when it's NORMAL. Bullying was just the process through which hate was systematically delivered to my soul, to diminish me, to use me and then eliminate me as a human being.

I worry for our nation, our world and most of all for our children. Why do I worry? Because hate, including and specifically Antisemitism, seems to have new hope and is raising its horrible ugly head. What is giving hate the renewed hope and latitude it craves? I don’t know exactly. I have a few theories…

People will never be perfect, I get that. But we, the people of reason, can't watch hate organize itself and get institutionalized and normalized. It can NOT happen. So, this blog is an S.O.S. We must stop it now!


That rainy April afternoon, decades ago, as we approached our building, my mom hugged me and I saw so much love and pain in her eyes. She simply hugged me tight and said: "it's going to be alright.” And, now as a mom, I realize that the real message in her eyes was: "I am so sorry I can't protect you from this."

My wish is to see the world where no child or a parent should ever experience this torment – emotional or physical. And my intent is to do what is in my power to support this vision of the world and to not let hate - in all its horrible forms - plant its ugly roots.

My brave friend, thank you for sharing your story. As a Muslim American, I worry about my childrens' future everyday. Any call from their school, which thank God is mostly the nurse's office gives us a heart attack. However I do believe in the goodness of the people and resilience of the oppressed to fight evil with kindness. I teach my kiddos to be kind to every living thing but at the same time to stand up for themselves when they are bullied. I guess being Black Belts in martial arts helps too:)

Hi Rina. Privet. I can reflect my childhood to your story. The difference if bully was picking on me I was fighting like crazy. It was no mater for me if they was bigger and stronger. Any antisemitism attack or comments made me explode. I am not pretending to be a hero but I was more afraid for them to think I am afraid of them than getting in fight. Adrenalin starting pamping so hard fear wood disappear. And atop massing with me. It was a lot of times i had to deal with hate in my life in Ukraine and Soviet Army. It was an fare and upsetting but it build my character. It is very destining to see same ugly staff on a rise. Your cousin Alex