My favorite quotes from the books I've read in 2014 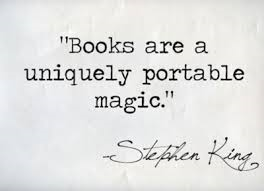 What Alice Forgot by Liane Moriarty

~The problem was that she couldn’t attach herself to a “today” or a “yesterday” or even a “last week.” She was floating helplessly above the calendar like an escaped balloon.


~Wouldn’t it be a lot less messy if everyone just stayed with the people they married in the first place?


~She drifted off because she was remembering what it was like when you broke up with someone. Conversations became so hopelessly tangled. You had to be polite and precise. You couldn’t safely criticize anymore, because you didn’t have the right. You’d lost your immunity.


The Sisterhood by Helen Bryan

~You run this enterprise as your full-time job, Menina—how do you get everything done?” Menina groaned. “I have no idea because I have never yet gotten everything done for just one day. I prioritize chaos.”

~Coaching is both a right and a privilege for your team members, not a penance for poor performers, as some leaders mistakenly use it.

~Keep in mind that effective sales coaching is much like baking a cake. The individual ingredients aren’t all that enticing; the magic happens when you put them together.

The Red Tent: A Novel by Anita Diamant

~We made love very slowly that night, as though for the last time, weeping. One of his tears fell in my mouth, where it became a blue sapphire, source of strength and eternal hope.


~Laboring mother bring out other women like geese responding to the call of a leader in flight.

~“Dear one,” she said, putting my hand to her cheek, “I am so honored to be the vessel into which you pour this story of pain and strength.


Gods and Kings: Chronicles of the Kings #1: A Novel by Lynn Austin

~But the peace of God comes from knowing that there’s an order in the universe and there is a reason for whatever happens, even if only Yahweh [God] can see it.

~Stopping evil was like trying to hold back the waves of the sea.


~How you sell has become more important than what you sell. An effective sales force is a more sustainable competitive advantage than a great product stream.


The Elegance of the Hedgehog by Muriel Barbery


~“Life has meaning and we grown-ups know what it is” is the universal lie that everyone is supposed to believe. Once you become an adult and you realize that’s not true, it’s too late.


~To beauty, all is forgiven, even vulgarity.

~When tea becomes ritual, it takes its place at the heart of our ability to see greatness in small things. Where is beauty to be found? In great things that, like everything else, are doomed to die, or in small things that aspire to nothing, yet know how to set a jewel of infinity in a single moment? The tea ritual: such a precise repetition of the same gestures and the same tastes.


~The tea ritual, therefore, has the extraordinary virtue of introducing into the absurdity of our lives an aperture of serene harmony. Yes, the world may aspire to vacuousness, lost souls mourn beauty, insignificance surrounds us. Then let us drink a cup of tea. Silence descends, one hears the wind outside, autumn leaves rustle and take flight, the cat sleeps in a warm pool of light.


~True novelty is that which does not grow old, despite the passage of time.


~Madame Michel has the elegance of the hedgehog: on the outside, she’s covered in quills, a real fortress, but my gut feeling is that on the inside, she has the same simple refinement as the hedgehog: a deceptively indolent little creature, fiercely solitary—and terribly elegant.


~We don’t recognize each other because other people have become our permanent mirrors.

~I would recognize you anywhere.

~Maybe that’s what life is about: there’s a lot of despair, but also the odd moment of beauty, where time is no longer the same.


~Yes, that’s it, an always within never.


~It may have been that they were weak people, ill suited for the rigors of emigration, its humiliations and compromises, its competing demands of self-discipline and adventurousness.


~I’ve stumbled on a fellow outsider, one who speaks my language without saying a word.


~My entire life has felt like chance. Random moments of loss and connection. This is the first one that feels, instead, like fate.


~But behind everything I do is a low hum of fear.


~I learned long ago that loss is not only probable but inevitable. I know what it means to lose everything, to let go of one life and find another. And now I feel, with a strange, deep certainty, that it must be my lot in life to be taught that lesson over and over again.


~I’ll tell you something: marrying Jim was like stepping into water the exact same temperature as the air.
A Dangerous Fortune by Ken Follett


~Maisie had at first felt it was unnatural for a child to grow up surrounded by servants, and she feared that Bertie would be overprotected; but she had learned that rich children played in the dirt and climbed walls and got into fights just as much as the poor, and the main difference was that the people who cleaned up after them got paid.


~People tend to assess the relative importance of issues by the ease with which they are retrieved from memory—and this is largely determined by the extent of coverage in the media.

~Puzzling limitation of our mind: our excessive confidence in what we believe we know, and our apparent inability to acknowledge the full extent of our ignorance and the uncertainty of the world we live in.

~We are prone to overestimate how much we understand about the world and to underestimate the role of chance in events.

~The best we can do is a compromise: learn to recognize situations in which mistakes are likely and try harder to avoid significant mistakes when the stakes are high.


~Intelligence is not only the ability to reason; it is also the ability to find relevant material in memory and to deploy attention when needed.
Posted by Rina Koshkina at 11:17 AM

Some of these quotes resonate deeply - thanks for sharing these, Rina.

I have already stolen a quote for my cube at work: "I prioritize chaos"!

Thank you and love right back